About that observant fella . . .

July 07, 2019
I often compliment my daughter on being observant (and she is!). In some ways, I'm trying to call her attention to something I wish I were better at. That is, being observant.

Alan has the gift Caroline does. Two interesting examples of it.

While trying to find dinner one night in Paris, Alan caught a sign written in French that said something-something about the times of Christ. Turns out, it was a pathway to an ancient Roman arena where gladiator matches might have once taken place. 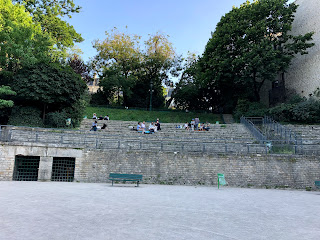 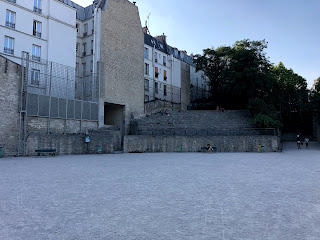 I know. It looks like a park or courtyard. It really is a relic of the Roman era, though, right in a neighborhood in Paris.

On our final night of the trip came another moment. Alan came across a pair of stumbling stones, which we weren't aware existed in Belgium. 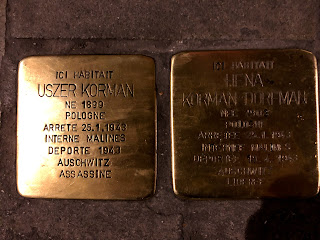 Stumbling stones are a form of remembrance for victims of the Holocaust. They are placed in locations where individuals have memory of those victims last being seen. These were relatively flat against the surface of the street. In other locations, they stick up enough to make one stumble over them.


There were some other humbling moments were we saw attempts at preserving memory of Jewish victims of the Nazi regime. Shortly after we saw the arena Alan found, we walked down a residential street in which signs indicated that some victims had been apprehended there in the 1940s. 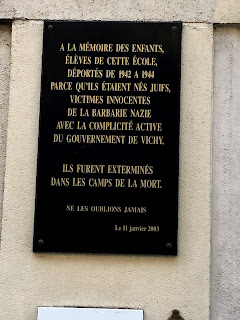 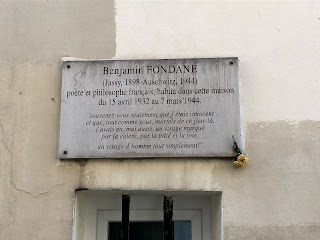 The first placard you see above surprised me in how precise it was about the assistance Germans received from the puppet government. Occupation is a complicated thing. So too is the evil complex of actions the made up the Holocaust. Memorialization like you see above isn't often seen in the U.S. and I'm thankful for friends who help me notice these details while traveling abroad.

Popular posts from this blog

Some Thoughts on Liberation

July 22, 2019
One of the markers placed by the French and Belgian governments to mark the path of the liberators.  My greatest takeaway from this most recent trip involves some refined feelings about liberation. I'm writing this post in a time of high cynicism. And the were matters of which one could be cynical back in 1944, the year in which Charlie fought and died. This trip, however, left me with renewed appreciation for what our country did back in that war, helping me refocus on what I've had the chance to see and do the past few years. Christopher is the military historian who accompanied us on this voyage. In one of our webinars this spring, he made an offhand reference to a piece of scholarship about the Holocaust he said was worth reading. It's entitled Bloodlands: Europe between Hitler and Stalin. It's heavy. I can't say I read every chapter. But I read most of it on our bus rides this summer. And I'm glad I did. My unassigned reading. Saying that Bloo
1 comment
Read more

July 16, 2019
Charlie Simcox I mentioned in a previous post that Charlie reminds me more of my grandfather than any of the others that I have gotten to know the past few years. This has lent an air of happiness to much of my research and journey, but in at least one way has made me more sad than the previous projects. Donald Smith. Why did I settle on Staff Sergeant Charles F. Simcox, Jr. as the subject of my research? My task was to identify a soldier buried at Luxembourg who came from Pennsylvania, preferably from near where I live. I had a lot of names to choose from (many Pennsylvania boys are buried there). My second choice was a Montgomery County pilot who flew troop planes. Charlie stuck out, though, for a few factors. The name mattered: distinct but not prone to misspelling. That he was from Chester County mattered, too. That was home to me growing up. That he had earned a Distinguished Service Cross and had risen to the rank of Staff Sergeant also suggested to me that there might
Post a Comment
Read more

July 11, 2019
By Charlie's graveside in Luxembourg.  You may find the eulogy I wrote for Charlie interesting. I have it copied here. The marker by which we stand today identifies Staff Sergeant Charles F. Simcox, Jr., as a hero who gave his life in service to our nation. Before entering the service, his family knew him as Charlie. To this day they keep the memory of Charlie, or Uncle Charlie, alive. Many of the members of this closely-knit group still live near West Chester, Pennsylvania, where Simcox grew up. They have not grown apart in the decades of peace and prosperity that Simcox’s service and sacrifice made possible.    Something that I wanted to convey, but that seemed very difficult to convey, was the joyous and warm sense of his family. When I reached out to them this winter, they were more than happy to meet with me. I felt like something of a guest of honor. And so many of them came out to meet me that I lost track of who was who. A warmly receptive family isn't a
Post a Comment
Read more