Those whom we honored (the first eulogies) 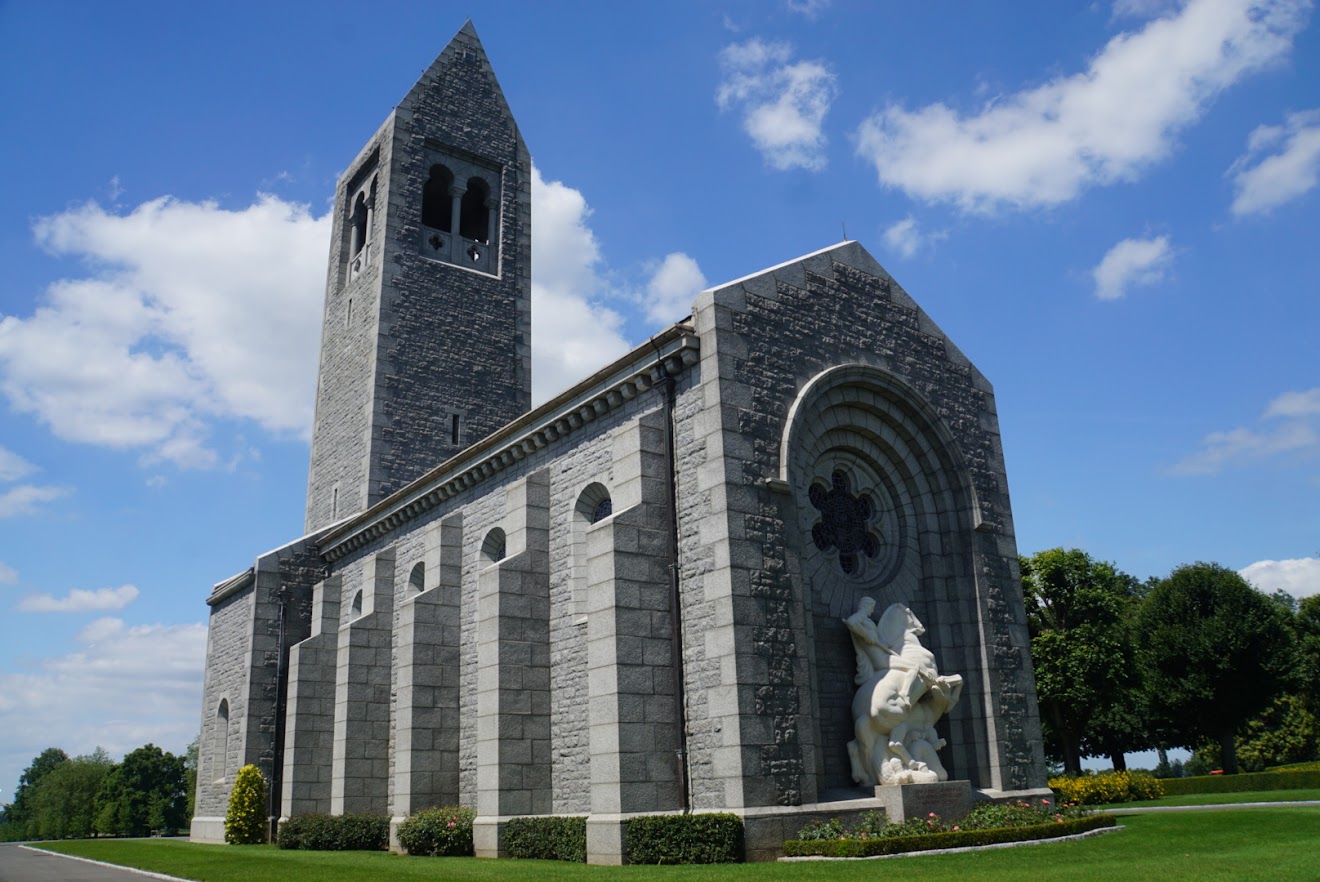 There were eight teachers on our 2019 Understanding Sacrifice trip. Each of us had the honor of eulogizing one soldier or sailor who lost their lives during the war.


The first two of us to do so were Leif and Gena. They each did so in April for sailors memorialized at the East Coast Memorial. Many of us have walked near or even by this memorial without realizing it. It's located in Battery Park.


With each eulogy I'm surprised at the way in which the fallen hero's story is unique and interesting. Leif memorialized a sailor lost at sea in what was first called an accident, then changed to killed in action decades later. Turns out U-Boats were operating off the Maine coast as late as May 1945. Gena somehow came across another real character, a naval officer who before the war was well connected with the radio scene and who could even count Dorothy Lamour among those whom he dated.

Once we arrived in Europe, we visited two cemeteries. One of the teachers in my crew, Jeannine eulogized a soldier buried at Brittany Cemetery. Suzy also read a eulogy for an Iowan prepared by Manion, a staff member from ABMC who at the last minute had to excuse herself from the trip.

This was my second visit to Brittany American Cemetery and it might be my favorite of the three that I have visited. The architect made a fairly serious effort to design the chapel in such a way as to complement the countryside near it. The focal point of the design is a chapel that looks rather modest. Inside there are a pair of murals on the two long walls showing the progress of the war. The arrangement of the graves is quite interesting, too. Their in neat curved arcs so as to resemble the badge for the Supreme Headquarters Allied Expeditionary Force. 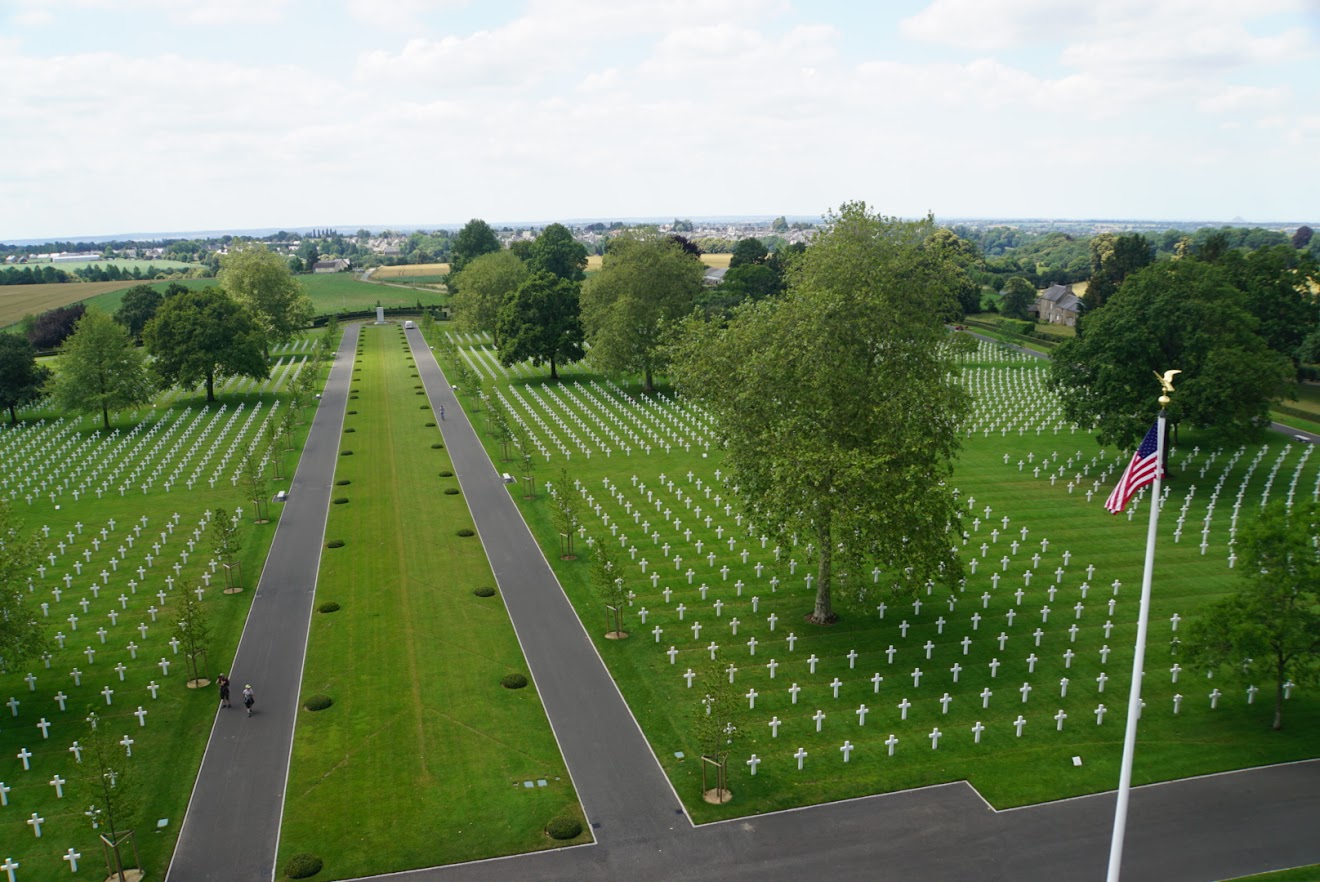 Alan got permission for some of us to go up into the tower, which afforded some very nice views.

Popular posts from this blog

Some Thoughts on Liberation

July 22, 2019
One of the markers placed by the French and Belgian governments to mark the path of the liberators.  My greatest takeaway from this most recent trip involves some refined feelings about liberation. I'm writing this post in a time of high cynicism. And the were matters of which one could be cynical back in 1944, the year in which Charlie fought and died. This trip, however, left me with renewed appreciation for what our country did back in that war, helping me refocus on what I've had the chance to see and do the past few years. Christopher is the military historian who accompanied us on this voyage. In one of our webinars this spring, he made an offhand reference to a piece of scholarship about the Holocaust he said was worth reading. It's entitled Bloodlands: Europe between Hitler and Stalin. It's heavy. I can't say I read every chapter. But I read most of it on our bus rides this summer. And I'm glad I did. My unassigned reading. Saying that Bloo
1 comment
Read more

July 16, 2019
Charlie Simcox I mentioned in a previous post that Charlie reminds me more of my grandfather than any of the others that I have gotten to know the past few years. This has lent an air of happiness to much of my research and journey, but in at least one way has made me more sad than the previous projects. Donald Smith. Why did I settle on Staff Sergeant Charles F. Simcox, Jr. as the subject of my research? My task was to identify a soldier buried at Luxembourg who came from Pennsylvania, preferably from near where I live. I had a lot of names to choose from (many Pennsylvania boys are buried there). My second choice was a Montgomery County pilot who flew troop planes. Charlie stuck out, though, for a few factors. The name mattered: distinct but not prone to misspelling. That he was from Chester County mattered, too. That was home to me growing up. That he had earned a Distinguished Service Cross and had risen to the rank of Staff Sergeant also suggested to me that there might
Post a Comment
Read more

July 11, 2019
By Charlie's graveside in Luxembourg.  You may find the eulogy I wrote for Charlie interesting. I have it copied here. The marker by which we stand today identifies Staff Sergeant Charles F. Simcox, Jr., as a hero who gave his life in service to our nation. Before entering the service, his family knew him as Charlie. To this day they keep the memory of Charlie, or Uncle Charlie, alive. Many of the members of this closely-knit group still live near West Chester, Pennsylvania, where Simcox grew up. They have not grown apart in the decades of peace and prosperity that Simcox’s service and sacrifice made possible.    Something that I wanted to convey, but that seemed very difficult to convey, was the joyous and warm sense of his family. When I reached out to them this winter, they were more than happy to meet with me. I felt like something of a guest of honor. And so many of them came out to meet me that I lost track of who was who. A warmly receptive family isn't a
Post a Comment
Read more